Supporter David Nunan - Learning from those who've gone before you....

One staple of learning is the point that we must learn from those who've trodden the same steps as ourselves previously. The whole notion of not just learning from out mistakes but THEIR mistakes. A kind of cost/benefit approach to wisdom.

I came across this interview with a TEFL guy I admire greatly, David Nunan. He's wrote academic stuff, he's wrote textbooks, been the head of large educational organizations and just has a "can do" aura about him...So he's a… Continue

So most of what I put here from the news is how horrible people treat eachother. So it is with great pleasure that I get to share this story about a man who took his mugger out to dinner after the fact.

And because good things come in pairs, I want to send you back to NPR so that you can enjoy this song. The lyrics "I hate… Continue

ESL/EFL teachers from seven countries (Kuwait, Brazil, Argentina, the United States, Sudan, Hungary, and Romania) have brought our classes together online to correspond and to develop joint projects. You can see some of the first efforts by our students in their introductory slideshows, VoiceThreads, animated movies and videos at our Student Showcase.(http://esleflstudents.edublogs.org/) Feel free to leave audio or written comments on the VoiceThreads, and written comments on the blog itself.… Continue

So Korean middle school students elect student leaders. I have heard that these elections are held Iranian style, meaning the powers that be at a school approve a list of "electable" canidates. In other words no "trouble makers" allowed.

So since Changpo's election is Saturday, I was greeted by campaigners for each of the three canidates. All it is much like an American political campaign. Meaning, as soon as I turned the corner this morning I was… Continue

Long time readers of this blog know how I feel about Wal-Mart after working for them and trying to fight the opening of a Super Wal-Mart in Flagstaff. These experiences left me bitter and I have since refused to shop there under any circumstances. Living in a country that managed to drive out Wally World, I have little reason to rap about it for quite awhile. That was until I saw…

Supporter Ideas for the future of (online) learning.

A MANIFESTO FOR learning2…
Continue

Added by ddeubel — No Comments

From time to time I still think about Bill Kapoun, the expat who was kill when his apartment caught fire that I have posted about before. So I check the facebook group that his family put up which is update much more than billkapoun.com. Donations have allowed Bill's family to pay for his medical bills in full and other than that his… Continue

If you haven't already, click the above and talk to me. Yes, ME! David. Or Click our Dave… Continue

Although it is more of a documentry style I really enjoy MikeinKorea's vlog and he is very very consistant. This is the… Continue

So I feel that I have been mostly rapping about the news lately rather than documenting La Vida Coreo. Not sure why, but it seems that some music bands and certain news items have really been capturing my attention lately.

Last night we (the EPIK Kidz +Allison) went out for crab in Jukdo market. It was EPIK Netty's first time eating crab and we where able to make her jump by telling her that the crabs might still be alive. Thats the thing about Koreans they know… Continue

Supporter Karaoke: Just do it!

All EFL teachers need to love songs and chants: they work, they're fun, and it's such an easy wage to engage!

I've got a resource page up for many things including karaoke files supported by the Karafun program: .kfn format. You can check the site here: ICnelly's Resource Page

And, I've just started a Youtube channel for English Karaoke. Since i'm a dedicated elementary teacher, the majority of my files are definitely geared… Continue

So I made a new video about a Tibetian temple that I saw in Beijing. The historic Lama temple was really pretty and unique but there was a strong police presence. I decided that this would be the next video because it became really timely with the riots in Tibet and China's declaration of a "People's War" (the equivelant of a communist jihad) against Tibetians.

So the media and some human rights activists are pointing to public statements, like this one, as signs that China is finally being shamed into speaking on darfur by international pressure. While it is change of policy to speak publically on the genocide that is taking place in Darfur, it is also clear that mouth pieces like Liu Guijin are merely touting the same nationalistic taking points that we hear over and… Continue

I have made a self introduction to use when I start classes again in April. Please help me make it more interesting by adding your comments and questions. I'll be using this in speaking classes and integrated skills classes, so both written and spoken comment are welcome. Thanks in… Continue 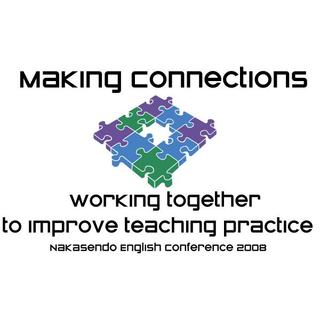 Over the past few months I've been involved in organising a rather unique conference to be held at Seigakuin University in Saitama, Japan. Recently there has been a trend toward cooperative organisation of ELT conferences in Japan iincluding the Japan PanSIG Conference, The Joint Tokyo/West Tokyo conference, and there will soon be a joint JALT-JACET conference. The Nakasendo English Conference builds on this trend. It brings together 5 separate… Continue

P.S. I forgot to blog this video that I uploaded in China. P.P.S. Despite that it has more that 4 times the views of my other recent videos.
P.P.P.S. Those getting a haircut are EPIK Anil (Duckbasket) and EPIK Netty
P.P.P.S. This takes place in Shanghai
P.P.P.P.S. As I am sure that you can tell I lament the fact that I do not write many letters any more. If I did write scores of letters I would have surely gotten my desire to gratuitiously abuse the P.S.…


In case you dont know what an ajumma (great article) is this video sums it up quite nicely. You have to wait for the punch line at about 0:43. There are many theories about why they act like this, and trust me they do ALL the time on the streets.

I subscribe to the "I have raised X amount of kids, put up with my husband and this male dominated society since before you… Continue

First the bad news:
Bill Kapaum has passed away. This was the teacher was was seriously injured in a fire last weekend. At the time of my previous post he was still alive in intesive care and his parents where making arrangements to have him transported to a Cook County burn center. But unfortunately he did not make it though the week. I am very sad even though I never knew this individual or… Continue

Reminder To Contribute to the Next ELL/ESL/EFL "Carnival"

The deadline to submit blog posts for the fourth ELL/ESL/EFL Carnival is March 31st. You can use this submission form to contribute posts from your blog (including student work) that you think offer helpful advice or insight about teaching English as a second language.

Some people have already sent-in great contributions. Keep them coming!

Supporter The Week is Justin Getting Surreal

So... Those of you that know me well might recall that have pointed out in the past that I generally like animals a heck of a lot more than a like people. Although this view does exists parallel to a more pragmatic view of death, nature, and the circle of life. I am more likely to give to an animal shelter than a food bank.
And it is also why I get upset when a video on Youtube shows up of an American soldier in full army gear throwing a puppy off a cliff to its death.

I am not… Continue