Added by Michael Stout — No Comments A Chinese blogger was beaten to death by over 15 Chinese officials. His murders are members of the Chengguan

, who as the link article will show have a dubious mission in China.

We are no living in the age of Read/Write media. At least until the infrastructure of the Internet gets overloaded in 2025ish and traditionally cheap or free features of the internet become a thing of the past.

Anyways, the Vlog Brothers and the Nerd Fighters

Supporter The Daily Kos had an interesting post about Facebook new "advertising" system. I have to admit that I am outraged. Not only are these tracking programs just diabolical but I am certain that they are …

about Facebook new "advertising" system. I have to admit that I am outraged. Not only are these tracking programs

just diabolical but I am certain… Continue

about Facebook new "advertising" system. I have to admit that I am outraged. Not
I want to quit

facebook and myspace until they are more thoughtful and… Continue

Just had the spiciest bowl of ramen that i have ever had. Koreans like thier "Ramyen" spicey but that was out of control... it was good though. Ramen is a cheap ($2.50) and quick meal that you can get at a number of places within your average block.

I scolded some students for the first time today. I didnt really care for it and it really felt like talking to a walk. Actually it was talking to a wall for the one, the other one cried. This is part of my new intiative to get control of…

I am sick of those forms that get sent out over Myspace, LJ, and Facebook that are basically chain letters/surveys that ask about the past year. They usually ask things like: Best Moment or what not. This year I am present I own "Best of" list". I think I earned it as it has been a remarkable year. Over the next couple of days I list the best of various categories that matter to me with a number one and two runner ups. I would encourage others to do the same. It is very important to note that… Continue

Supporter Co - Teaching - Setting it up for Success 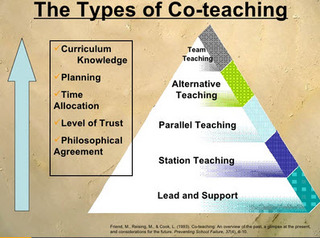 If you are coming to Asia to teach EFL, in many cases you'll be coteaching. Also, if you are teaching ESL in North America, usually you are also doing some form of coteaching and supporting a regular class program.

It is essential you do it right or your life can be hell. I was asked to give some advice recently and I've copied it below. You can find out lots more by…

Re: Math, Science and Social Studies Websites Of The Year

Hi, Everybody, Here are a few more lists I've compiled that I thought people might be interested in:

While you're there, you might also want to read my list of The Best Online Learning Games -- 2007.

I've come up with my picks for this year's best fifteen web 2.0 applications for ESL/EFL. You might want to check them out here.

Edusim leads others to try Croquet worlds on surfaces (kinda)

Our plans for haptics in Croquet have not gone un-noticed either ! …
Continue

Added by Rich White — No Comments

Supporter Hand-holding Teachers and Integrating Technology into their Classrooms

Any advice on "baby steps" for introducing technology into the classroom. Many teachers, especially in certain regions of the world, have not started using technology. I'm interested in a variety of responses in coming up with that perfect recipe for my region.

If you could make 5 gentle but meaningful changes to start, what would they be? The students are far ahead of the teachers in this game right now. So, how do we get on track fast but appropriately?


Added by Frank — No Comments

Added by Rich White — No Comments

Yesterday I showed the students my personal ning page with the class videos section. I've made the videos 'just for pals' to ensure their security so only a few people can see them. They were so excited when they saw the few comments there especially knowing that they were from teachers in other parts of the world. Very big smiles all around.

On a different note, we also watched some interviews the students had shot the previous week at our Showcase (… Continue

Supporter Students wow the Audience with their Multimedia Show

I'm still on a high and can't stop smiling about it.


On Thursday my ESL students presented their 'How to catch Public Transport' Showcase to the University community. It was a real triumph in so many ways. The presenters spoke confidently, clearly and with a real enthusiasm. They rose to the occasion to use an old cliche. Our technology managers… Continue

Supporter JUTECHT on The Value of Online Presence

Just read an interesting blogpost by JUtecht "The Thinking Stick"on the value of your online presence, social networking skills and your actual network to your employer ie school and education authority.

I just posted about this on my blog, ESLetc.com.

From January 14 to February 24, TESOL is offering a free, online conference. In addition to being free, the session are open to non-TESOL members. The Electronic Village Online is run by TESOL’s computer assisted language…

Hi, Everybody, The second edition of the ELL/ESL/EFL Carnival has now been posted. You can check out insightful posts submitted by bloggers from around the world.

Supporter Fling the Teacher! - Who needs them? 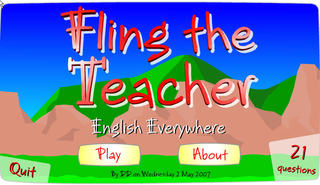 Is it hard to motivate your students sometimes? Are you looking for a way to create more classroom "togetherness"? Looking for a unique way to review material and informally assess student's language acquisition/level? Look no further than this fun and so practical game by a great history teacher, Andrew Field.


Fling the Teacher is a "Content generator" style game. Meaning, you the teacher just… Continue