Natasha's Story and the story of other "adoptees" 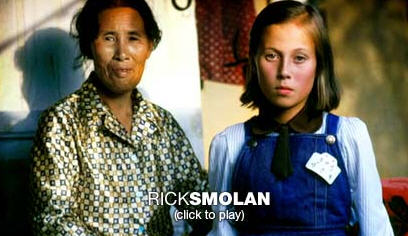 See the FULL SCREEN version and more TED videos on our TED Talk feed page. Living as an EFL teacher rogue, roustabout, expat and "outsider" -- one often gets to see the world in special ways. It is a tremendous opportunity to grow as an individual and to really see humanity for what it is. See not just the diversity but the ever expanding endpoint of that process -- how much we are all so similar. Living in a foreign culture allows one to come across stories like the one above, Natasha's story (which is also the photographer Rick Smolan's story and also now your story!). It hits on so many levels but mostly it hit me where I am human -- why we don't care for some others and why we do care ....... But this story also bothered me and this blog post I found later, really deals with those issues and clarified things for me. I was bothered because it seemed too good to be true, also like Natasha was manipulated and I kept asking myself, "who has any right (other than a Korean family member) to adopt that child?).

Natasha was a raised by her grandmother in a remote village in S. Korea. She had an American G.I father. She looked very Causcasian, different. Her story is wonderful and starts when she is hunted down by a young, eclectic photographer who wants to shoot her story and those of other abandoned Asian/American children. But it is so much more than just this....please watch!

This semester in class, I've been teaching Korean teachers to use Korea as a subject through which to teach English. Please see our scribd Korea folder for some materials. But using the student's culture is a super way to get them focusing on production and it really enhances language acquisition.

But part of my lesson has to do with "What makes a person Korean?" . So many answers arise - passport/language/Mongolian butt (a small spot they are born with but which disappears)/food/attitude etc...... Then I show them this video of Joh, who has returned "home" to Korea to find his biological parents. I ask my teachers - is Joh Korean? Lots of lively debate, heated debate even ensues. At first I had my qualms about this sort of lesson but I really think it good for us to take teaching to this very personal level, this illuminating and self growing level.

Natasha's story has made me realize I can do more while here in Korea (or anywhere for that matter). What about your own part of the world? How are the children? What is happening to the orphans there? If you have info. or comments about Natasha's story, please share....but most of all, watch this story. Unforgettable!

Comment by Ellen Pham on September 5, 2008 at 7:10pm
I don't know, David, it is all so complicated- race, culture/ethnocentricity, being a war refugee, being the child of a war refugee, growing up without a racial identity- which everyone who doesn't like to see themselves as a redneck insists is unimportant, like they could even know...(I've never heard a mixed race person say racial identity is unimportant- and who to better know and understand it?)

Two little things struck me as I watched- the juxtaposition of Natasha "organizing the orphanage" in Korea/ cheerleading and being in beauty pageants in the US, what a trade in meaning and depth; and in hearing Natasha speak at the end of the TED talk, and knowing, knowing, that she will always be an outsider here because of her accent. And then thinking, yes, an outsider here (of course, she will not feel it in her own little family that she creates, but in daily outside transactions, esp with strangers), but her parentage would always make her an outsider in Korea too. And there is the chance she would have been forced into prostitution, no matter how talented/gifted she is. Without the protection of her grandmother, in a city, when she got to a certain age, if she couldn't find work because of her parentage, well, I wouldn't have bet the house on the good graces of her uncle, who knows? Maybe she would have gone on to greater things, who knows?

Maybe it is my state of mind, but when watching the videos and reading the blog, I felt so weary of our prejudices, of the unrelenting activity of separating ourselves into "us" and "them", through race, through country, language, money, abilities, beauty and physical appearance, sex, family, traumas we've suffered and have not suffered, what each of us has been alloted. When are we going to knock it off? Each of us has to know somewhere that it is wrong to separate and rank ourselves like this. If I were to write a fitting myth for this situation, I would strike all of humanity blind, and probably mute, and we would need to figure out how to live with each other from there. And like in the story of Pandora, when all that is left in the box is a little spirit called hope, in my myth, it would be a little spirit called trust.

We would do it, we would survive, though I think everyone would want a dog- sure footed, almost unconditionally loyal friends. (From my experience, they can still be lured away by irresistible food. If you don't neuter them, probably sex, too. Ah well, we are physical creatures, no shame in that : ) )

PS It is not called a Mongolian butt- dear lord, David- it is called a Mongolian spot. And it doesn't prove you're Korean, it indicates you have asian ancestry. Vietnamese have it too, and sometimes, their half-asian children : )

Supporter Comment by ddeubel on September 6, 2008 at 12:08am
Yeah, it is so complicated and confusing. But somehow without that - life wouldn't be beautiful, I think. Though I believe it every human's calling (to often arriving on deaf ears) to do all they can to not cause or to help alleviate necessary suffering.

You're right Ellen, her life in Korea probably wouldn't have been that "happy" (a word I use to judge life - it should be how we measure it). There is a very deep view in Korea of "race" being important socially. Family here though - comes first on the hierarchy but Natasha wouldn't have been able to just live in a family situation in Seoul, the big city.

Ellen, you wrote,
Maybe it is my state of mind, but when watching the videos and reading the blog, I felt so weary of our prejudices, of the unrelenting activity of separating ourselves into "us" and "them", through race, through country, language, money, abilities, beauty and physical appearance, sex, family, traumas we've suffered and have not suffered, what each of us has been alloted. When are we going to knock it off? Each of us has to know somewhere that it is wrong to separate and rank ourselves like this.

I feel the same way. Daily. Not just watching videos but I feel it in the step and eyes of others around me. Like a force, this drive to power through our own dehumanization and pushing down of others. Deep inside us, we have this monster that has to build our own self on the pain and worthlessness of other people.....I don't know if that will ever change but we should keep up the good fight - especially within ourselves.

But more and more, myself, I'm realizing the power of adoption. I used to think of it as a last resort, something done when there were no other avenues for both the adopting parents and the child. Now, I don't think so. I think we'd all be better if more people adopted and "had" children this way. The world would be a smaller place and we would discover the "happiness" of loving people for who they are, their gifts and not that just given. In Natasha's case and in that of so many others - adoption is a very high calling if done with the right mindset.

People (especially here in Korea!) always ask me, "David, how many kids do you have?" They ask as if it is obvious I must at least a few. I always reply jokingly, "Millions - all the world's children are my own." But I'm not really joking - I think that is more the truth than anything else.

To end (I got to get some coffee in me!). I'm not a Christian but when I was in high school, I read everything I could get my hands on about Christianity and even thought of joining a seminary (without every having gone to church once in my life!). All Christians believe the words of Jesus as being "the truth". Yet, they only dwell and believe some of the words. Jesus it is recorded said, "Unless you reject both your mother and father - you will not enter the Kingdom of heaven." Now what do those religious "righters" and most Christians have to say about that? They don't believe these wonderful words. But I understand. Our challenge as humans is to see no separation between others, each child is our child. Each mother our own mother. Each father our own father. It isn't communist - it is just the right thing in my opinion.

PS> Ellen, I'll see what Koreans have to say about the Vietnamese having the Mongolian spot also. It will probably put them in a lather! But - many Koreans call it in "Konglish" (a curious creole of English and Korean - "mongolian butt".