Supporter Comment by Roselink on May 19, 2011 at 10:50pm
You can read Real Democracy manifesto here in English, if you want.

If you don't let us dream, we won't let you sleep, that's one of the slogans written on the banners. It sounds a bit threatening but it rhymes. We'll see what happens in the next 24 hours.

The Madrid electoral board banned demonstrations just yesterday, but thousands defied the prohibition, setting up camp in the square, with more people arriving each day.They have been banned again oficcially.

Supporter Comment by Roselink on May 29, 2011 at 7:41am
The previous camera wasn't working.

I just watched this. About midnight over there. Wow - so much activity. In my town, the streets are dead quiet. Really been bothering me, after living in Asia so long I guess....

But this sort of "cam" stuff is amazing. Streams right into my office, so well. Why do we have to travel anywhere, anymore. I can get great Spanish wine here to boot! Oh yeah, the people...... Can't manufacture that or can you?

But I hope we just keep bringing more authenticity into our classrooms. Truly, there are not 4 walls any more - despite appearances.

Hope to take a look tomorrow morning, in the daylight.....

The sun is shining now but the camp does not let the square show its beauty. Ok, ok, it may not be  the most beautiful city centre in the world but it is of enourmous significance for Spaniards, especially for those from Madrid. I have found that Wikipedia historical data is quite accurate according to my knowledge.

As for the protesters some people start to think it is about time they move on, out and away from the camp. However there are supporters from almost everywhere in the world, as you can see in the video below. 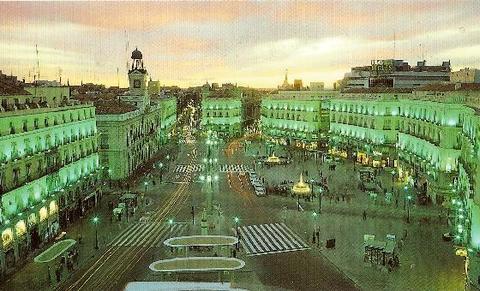 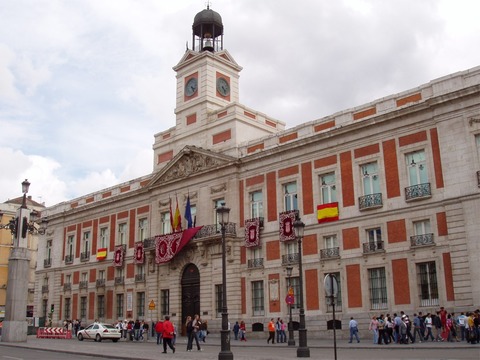 That's something I've always admired in Spain (and especially the Catalans). Their communal / people spirit and looking after each other (I hesitate to use that now loaded word "solidarity"). I had a few good conversations about Mondragon schools with a member here, Greg Brookes. He wants to bring their school system/model to Korea.

I really think the internet is bringing something back to the world, long lost since the early days of the enlightenment. That people count, have value and we have to do more to make sure things run/work for the people and not just the large corporate/politico entities which now are much like the Kings of old.

That's a question - what about the Spanish king? What do people think of him, or does he even matter at all?

Ecrasez l'infame, in the words of Voltaire. Fight the infamy. Let the light shine..... keep those posters up!