The "Special Olympians" in our schools. 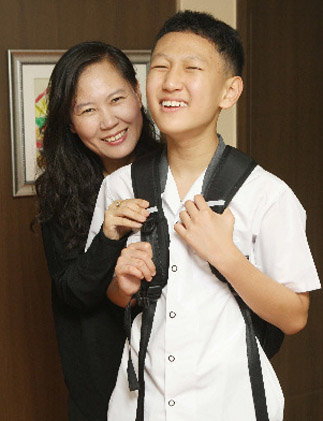 The longer I am teaching, the more time I spend thinking and living the "teaching life", the stronger grows my belief in inclusion. Meaning, classrooms of whatever specialty/level should be open for all and it is up to the school/community/teachers/students to adapt and accept this new dynamic. I've heard all the other arguments but I don't think separation is the answer at all.

It is the time for us to marvel at the Para Olympians in Beijing. But it is not just our athletes that need acceptance. Throughout the world, so many students, rich or poor, are excluded and shunned from regular classes. I totally disagree and think it is every teacher's calling to try and change this and regain a very fundamental state of equality and "right".

I get so happy hearing stories like the one below. A story of another country breaking down barriers and slowly changing and opening doors for students with special needs. But the battle is relentless, keep up the fight wherever you be!

A mother breaks down barriers for her autistic son
September 08, 2008
By Song Bong-geun

The first day of September was a memorable day for many 13-year-olds embarking on their first day at middle schools around the country.

But what made it particularly momentous for Kwak Sung-min, 13, and his mother Kim Song-hee, 41, was that as Kwak walked the halls of Busan Art Middle School, he became the first student with a developmental disorder to be accepted by an art middle school in Korea.

Until this point, the five art middle schools in the country were off-limits to some 40,000 kids with developmental disorders like Kwak. The groundbreaking achievement came after Kim’s unrelenting efforts over the past year to fight against the prejudices against disabled children in Korea.

Kwak is an autistic savant with brilliant drawing skills. Since kindergarten, he has expressed himself through his exceptional drawings instead of his awkward speech. Not surprisingly, Kwak has won prizes at a number of national art competitions including a recent Woori Bank-sponsored event in June where he ranked on par with many other art middle school students.

But acceptance to join his peers proved difficult. Kwak had tried to enter the school last year, but his application was turned down. The school cited their lack of experience of educating a student like Kwak, although they acknowledged that his talent deserved recognition.

Like most mothers, however, Kim didn’t back down and embarked on an effort to counter the prejudices of Korean society - represented by the school - against disabled kids.

“I believe that children with some disabilities have the same rights as their nondisabled counterparts to receive an elite education if they are talented,” said Kim.

After enrolling her son in an ordinary middle school in her neighborhood, Kim filed a petition with the Dongnae Office of Education in Busan and the National Human Rights Commission. She also wrote letters seeking support to professors of special education at universities across the country and Rep. La Kyung-won of the Grand National Party who herself is the mother of a disabled child.

In the course of her activities, Kim was constantly given the cold shoulder and had to listen to such ideas as “it’s too much for a handicapped kid to want to go to an art school when even attending an ordinary school isn’t easy for him.”

Just as Kim was feeling ready to give up, a group of mothers of disabled children stepped forward to back her up in her lonely fight. Kim carried on and in July, she finally received a notice from the Office of Education that her son would be allowed to transfer to an art middle school if he wanted to do so. It put an end to her almost year-long struggle for the rights of disabled children in Korea.

“If Michael Phelps had been born in Korea, with his attention-deficit hyperactivity disorder, he would not have been able to become such a great swimmer,” said Kim. “I hope Korea will create an environment for disabled children to become competent members of society despite their natural disabilities.”